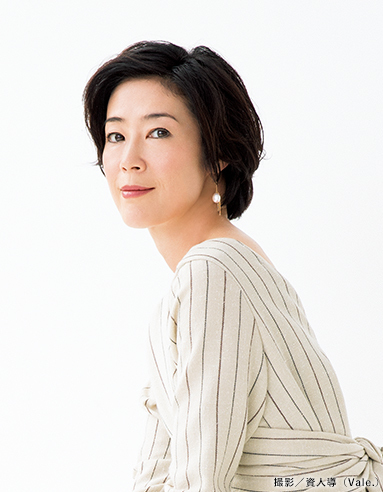 Shinobu was born on December 28 1972 in Kyoto.
She is the firstborn daughter in an unbroken line of stage family; her father is Kikugoro Onoe, a Kabuki actor and also designated a living national treasure; her mother is actress Sumiko Fuji; her younger brother is a Kabuki actor Kikunosuke Onoe.

While at Aoyama High School, Shinobu made her debut in TV drama "Shijyou no Tabibito" (NHK) in 1989.
In 1992, she became an understudy of acting group, Bungakuza, after she had gotten advise from late actress Kiwako Taichi.
She made her first theatrical debut in the following year in "Koi to Kamen to Carnival" which directed by Nobuhiro Nishikawa.
She also has met theatrical producer Yukio Ninagawa in the ame year in "Chi no Konrei". Shinobu continued theatrical works and appeared in a number of plays.
A charismatic actress late Haruko Sugimura sometimes took the leading roles in those plays. After she quit Bungakuza in 1996, she appeared in "Hanaoka Seishu no Tsuma" which brought her the breakthrough actress award at the Bunka-choGeijyutsuAwards.
Shinobu did not make boundaries and kept working in both theatrical and TV industries.

She married with French art director Laurent Ghnassia in 2007.
After the marriage, she appeared in "William Shakespeare’s The Merchant of Venice" which directed by Gregory Doran, an associate director of Royal Shakespeare Company.

In 2010, she is play the role of Otome, Ryoma Sakamoto’s elder sister, in NHK’s year-long period drama. Her other films in 2010 are "Ningen-shikkaku" directed by Genjiro Arato,"Caterpillar" directed by Koji Wakamatsu.
She won the Silver Bear for Best Actress in Berlin Film Festival 2010 (Official Competition)